What is Prague famous for? Ghosts, beer and missing heads…

What is Prague famous for? Ghosts, beer and missing heads…Few places in Europe have such a wide range of ghostly sites as Prague that they can warrant a permanent ghost museum and a plethora of night-time ‘ghost tours’. 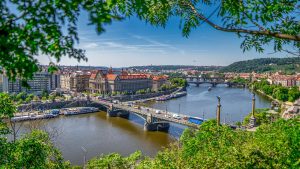 Prague is a beautiful city but, with unique and varied historic links to violent death, alchemy and the occult and with its medieval and gothic buildings, enclosed by narrow streets, it’s one of the ‘must do’ destinations to add to your paranormal bucket list. Let’s have a look at a trio of the more creepy sites.

The Convent of St Agnes is one of the prime destinations. A father found out that his daughter, a nun,  fell in love with a boy so he killed her. Now she haunts the building. Sometimes she appears smiling but often, she appears covered in blood and wailing.  On a brighter note she offers help to young couples with their problems .

Jáchym Berka  got engaged to his childhood love but, as was common at the time, wnet into the military service via the draft. Returning from the war, he found out his girlfriend had an affair while he was away. This turned out not to be true, but not before Jáchym, in his grief, married another girl. So his love committed suicide by drowning herself in the Vltava River. Her poor old dad, in shame, also killed himself by jumping from a city tower.

The final act of this tragedy was that Jáchym, understanding the grief that he had unwittingly caused, strangled his new wife and then hung himself in a cellar at Easter. Jáchym has found no rest and he wanders Platnéřská Street every night trapped in miserable servitude to the Devil. He can be released but at a price. Legend has it that, every hundred years, Jáchym has a chance of happiness again if he can find a virgin who will have a stroll with him for an hour.

There is a statue commemorated to Jáchym Berka, in the Old Town.

On the upside of the question: What is Prague famous for? Beer… 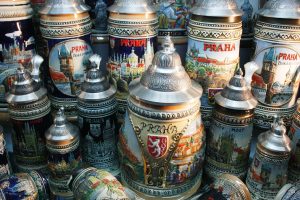 Historians recently uncovered the earliest evidence of a beer making in Czechia, at a brewery was founded in 993 at Břevnov Monastery in Prague. The beer was  a cloudy wheat beer using a top fermenting yeast process  Several hundred years later, other countries moved away from Ale to hop based beers. The Czech republic has more than 400 breweries,  and 30 of them are in Prague, as well as rare bottle shops and specialty beer bars that are regularly rated as some of the world’s best.

Here is a link to them Czech Breweries