Under the North Lights: Exploring Iceland and East Greenland 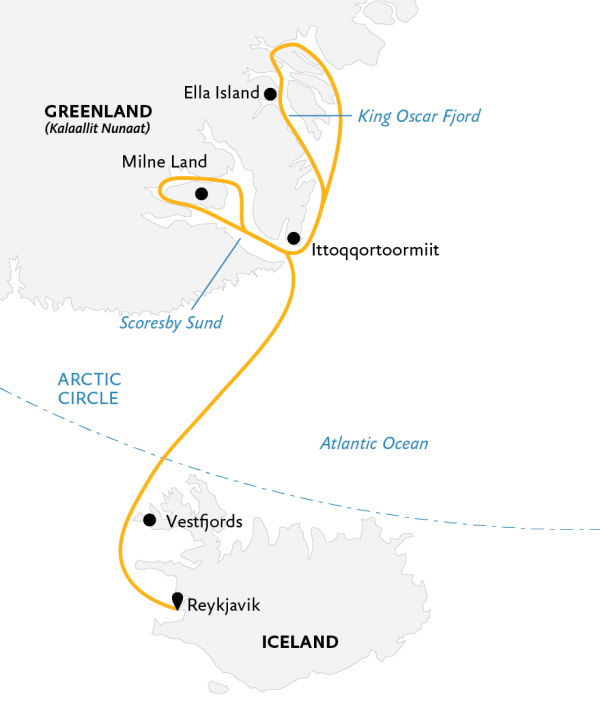 To begin your Northern Lights Cruise, first you arrive in the Icelandic capital in the morning and make your way to your included hotel. You will have the day to explore the city on your own.

This afternoon, you’ll board your vessel and begin your expedition. Get ready for a great adventure. Spend some time locating good Aurora viewing vantage points on the ship and connecting with the other enthusiasts.

Each region of Iceland has its own appeal for nature, bird and history lovers, and the little-visited Vestfjords (Westfjords), where the land meets the sea in the most dramatic fashion, is no exception. Exploring this rugged peninsula at the country’s remote northwestern tip offers awe-inspiring vistas of mountains, fjords and towering cliffs.

If we’re lucky and conditions allow, we might cruise along Látrabjarg, Europe’s largest bird cliff, teeming with puffins, razorbills, guillemots and more. Another possible destination is the quaint island of Flatey, where a replica of Iceland’s largest medieval manuscript, Flateyjarbók, can be viewed in the library. The church here features murals symbolizing life on the island, including one of Jesus wearing a classic Icelandic sweater.

As we cruise north across the Denmark Strait, your Expedition Team will prepare you for the adventures that await. Learn about the storied history and politics of the Arctic, it’s fascinating wildlife, geology, ecology and climate, and the incredible sights you will soon explore. The team will also search for the seabirds soaring around your ship, as well as the whales that frequent the waters here.

During your tour of Greenland’s remote northeast coast, you’ll enjoy Zodiac cruises and shore visits to several locations. We’ll also keep an eye out for grazing muskoxen, as 40 percent of the world’s muskoxen population lives in Northeast Greenland National Park. Sailing through spectacular Scoresbysund, the birthplace of many icebergs, you’ll immediately see why some say it’s the most beautiful fjord system on the planet. Sites such as Frederiksdal and Sydkap offer opportunities to explore the colorful tundra and the remains of ancient Thule settlements.

At the entrance of the sound is East Greenland’s most northerly community, Ittoqqortoormiit. Here you may spend time interacting with the Inuit people and learning about their way of life.

You may also have a chance to see the northern lights here if the skies are clear. Deeper in the sound, Røde Øya offers a picturesque locale for admiring the beauty of sky-blue bergs set against striking red sandstone cliffs. Magnificent vistas also await at Kong Oscar Fjord, with possible landings at Ella Øya, renowned for its rugged cliffs and ice-choked waters, and flower-rich Botanikerbugt, on Ymer Øya.

As your arctic adventure winds down, take in a presentation by our onboard experts, share your photos, sip an icy cocktail in the bar or watch a movie—there are many activities during your time at sea.

The lights may well be viewable each night from the deck of the ship. Join the other enthusiasts onboard in setting up your camera's and waiting for the Aurora Borealis.

Your Expedition Team will also be on hand to answer any questions and point out wildlife.

You’ll disembark in Reykjavik, Iceland’s capital, at the end of your Northern Lights Cruise. If you have booked post-expedition accommodation, we provide a transfer to a central downtown location.

Included on your Northern Lights Cruise

Documenting your voyage so you can take the memories home is a rewarding experience. Our photography guides will help you learn skills to capture the beauty of the Polar Regions.

Walking poles are provided at each landing for your convenience. As there are limited number of poles available, please bring your own if you require them on every landing.

Imagine gliding across the surface of a bay in the presence of icebergs and glaciers. Our Sea Kayaking adventures are a great way to feel at one with the sea. A small group of kayakers will plan to go out multiple times per voyage instead of shore landings. The number of kayaking opportunities is weather dependent and will only be conducted during calm conditions.

Prior kayaking experience is recommended for you to feel comfortable on the water, and the capability to do a wet exit is strongly encouraged. Beginners interested in kayaking should consider participating in the Paddling Excursion adventure option.

If you’re interested in kayaking and would like to try something less in depth than Sea Kayaking, you can still enjoy the benefits of adding an on-water experience to your expedition with a Paddling Excursion. Sign up for a one-time paddle on our sit-on-top kayaks, which are stable and unencumbered—perfect for anyone with little to no kayak experience. Expert guides take rotating groups of passengers on calm days to connect with the sea.

For all paid activities pre-booking is required. We recommend booking early as spaces fill quickly.

Having joined Quark Expeditions® with extensive experience in marine logistics and operations management, Laurie has since guided 70 trips to the Polar Regions. While she can be found with a book or passport in hand during the off-season, either traveling to new destinations or returning to her cottage in Ontario, she feels most at home in a Zodiac or hiking over the tundra. Laurie aims to help you discover the over­whelming beauty and power of these remote regions, providing you with a trip of a lifetime. Deeply touched by the arctic landscape and bountiful wildlife, she looks forward to exploring with you. 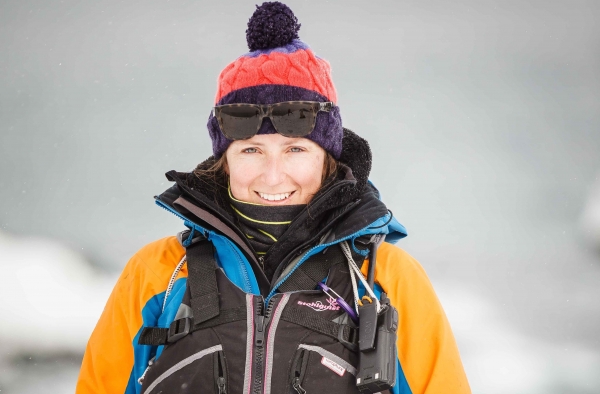 The newest addition to the Quark Expeditions® Arctic fleet, polar powerhouse World Explorer—our first all-suites, all-balcony ice-class ship—lets you discover everything the Arctic has to offer, with the type of service available only at premium hotels.

This little island, whose name means “Flat Island,” is one of the largest in Breiðafjörður Bay and is inhabited mostly in summer. The colorful, century-old houses are so well preserved that a walk through the picturesque village feels like stepping back in time. Iceland’s oldest and smallest library is here.

The largest bird cliff in Europe is home to about 40 percent of the world’s razorbills, as well as guillemots, fulmars and auks, plus Atlantic puffins, which nest here in the summer. Látrabjarg was also the site of a dramatic rescue in 1947, when British fishermen were shipwrecked below, and local farmers, trained in scaling the steep cliffs to collect eggs, hauled the 12 survivors up in a rope chair.

Iceland has been ranked by the United Nations as one of the best countries in which to live. Its capital, Reykjavik (which means “Smoky Bay”), was named by the country’s first settler, Norseman Ingólfur Arnarson, who was inspired by the geothermal mist rising from the ground.

Rich in Viking history, Iceland’s oldest region is renowned for its dramatic and diverse landscape. The rugged coast of this untouched, remote peninsula is dramatized by a series of steep, soaring cliffs—with some colorful beaches in between—boasting an astounding abundance of seabirds, including the clown-like puffin.

Known as the Bay of Flowers, Blomsterbugten boasts a colorful and lush landscape that is quite different from other Arctic regions like Spitsbergen. Expect spectacular fall colors, with possible hike to Noa Lake.

In Kong Oscar Fjord (King Oscar Fjord), this bay is home to a variety of flora. It is on the south coast of mountainous Ymer Oya (Ymer Island), part of Northeast Greenland National Park.

This can be a great location for viewing muskoxen. The peninsula is also home to wheatears and snow buntings, and you may spot rock ptarmigans or great northern divers while at sea.

Encounter stunning icebergs before hiking across Denmark Island, which offers stupendous views of Scoresbysund and Fønfjord below.

Around 500 people call this northern settlement home. Traditional hunting and fishing ways are alive and well here, as are the northern lights! This is known as one of the best places to have a chance of seeing the mysterious aurora borealis.

One of the many fjords in Scoresbysund, this deep fjord, which is also known as Island Fjord, is truly impressive, flanked by towering mountains and dotted with large icebergs.

Touring Røde Oya, or Red Island, rewards with stunning views of white and blue icebergs against a background of soaring red sandstone cliffs. The unexpected contrast makes for striking photos.

Red Fjord, or Rødefjord, is named for the colorful sandstone located on its western side. The stone has been “stained” red by hematite, creating an odd beauty in this part of Greenland.

Revered by many as the most beautiful fjord system in the world, Scoresby Sund is definitely the most extensive. The sound was named by William Scoresby Jr., a whaler, scientist and man of the cloth, who was famed for mapping more than 400 miles (640 km) of Greenland’s coastline. 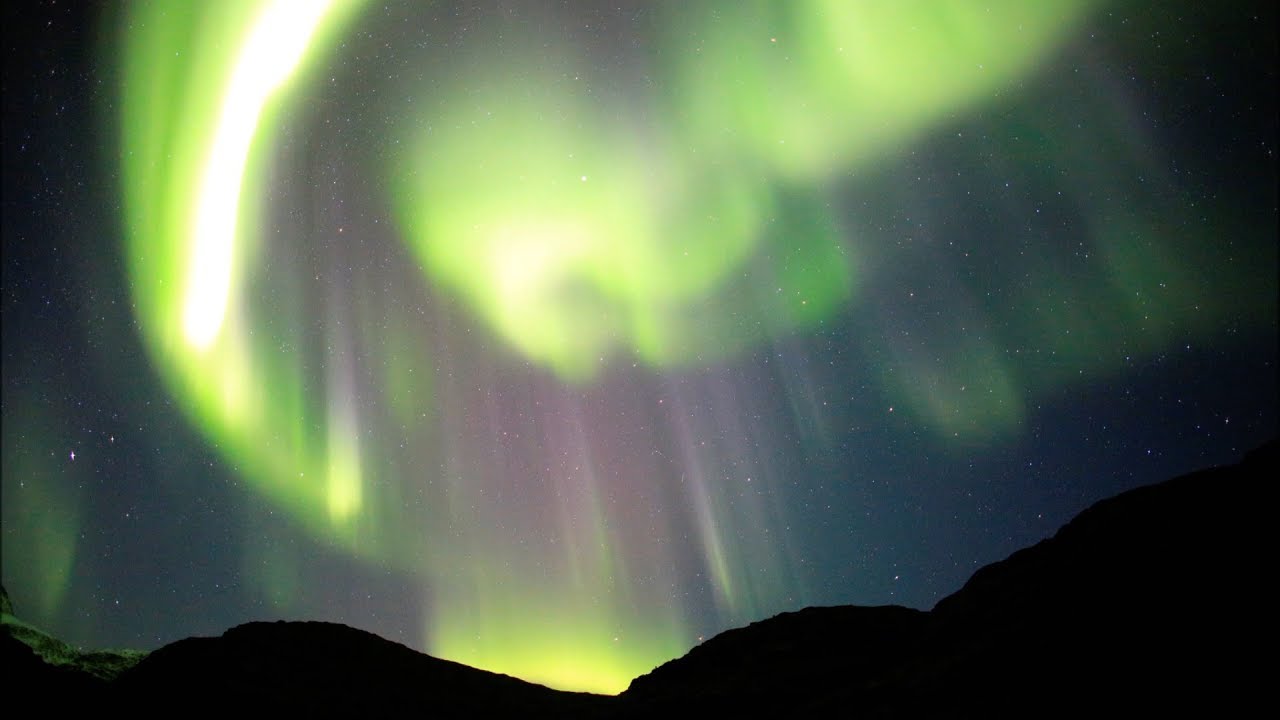 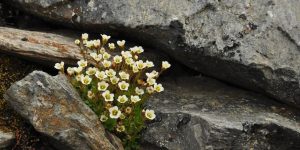 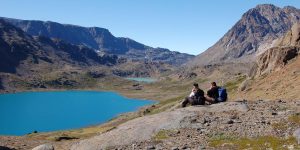 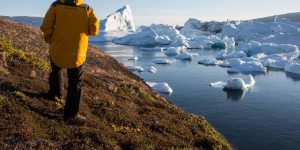 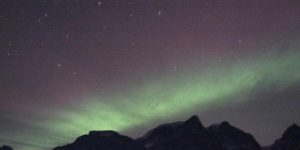 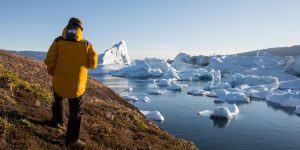 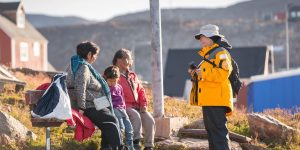 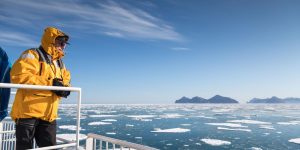 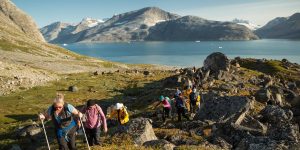 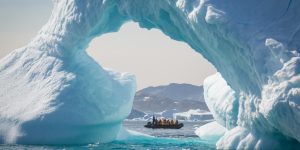 We hope you are inspired to join us on the Northern Lights Cruise. Here are some Tourist Authority Links to help your research:  Arctic Antarctic -  Greenland - Iceland