Whether you like the mediterranean beachers,  plentiful history or mature culture. Croatia has it all. The Dalmatian Coast  is one of the most celebrated coastlines in the world. You will find rugged outlooks, crystal clear beaches and little swimming coves. There is enough ancient and modern history to sink a battleship. Croatia is dotted with charming ancient towns and

architectural remains of former Roman glory as well as towns with great importance during the middle ages. Croatian culture, art and cuisine has matured from its ancient Greek, Roman and Illyrians beginnings. The current culture has Slavic, Hungarian, Viennese and Turkish influences.

Dubrovnik is  the departure point for most cruises and tours. This ancient city was built with protective town walls is a UNESCO World Heritage site. It was an important maritime republic in the 15th century rivaled only by Venice. Dubrovnik’s fascinating medieval centre impressed the English poet Lord Byron so much that he called the city the “Pearl of the Adriatic”. Dubrovnik leaves the same impression on its guests to this day. Its beauty has attracted the Hollywood producers as the location for Game of Thrones and Star Wars. 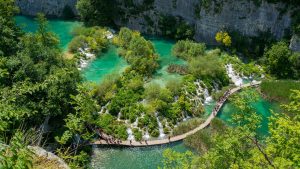 Another place in Croatia included on many “must see” lists are the UNESCO Natural Heritage Plitvice Lakes. There are sixteen turquoise lakes surrounded by hundreds of white waterfalls break through green treetops.  You will feel like you are in the middle of an enchanted garden.

Split  is the home of many wonders including Diocletian’s Place, the largest Roman palace ever built with the Peristyle, the Jupiter’s Temple from 300 AD and the Cathedral added later. The huge complex is now part of the old town of Split, an attractive place of Gothic and renaissance palaces and a beautiful waterfront.  Diocletian founded the city of Split 1700 years ago as the ideal place to spend his retirement. The city’s residents today call it the “most beautiful city in the world”. Split boasts some fascinating achievements, for example, did you know that this is home to the largest number of Olympic and world medalists per capita? 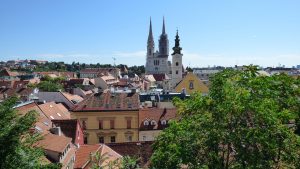 Zagreb, the capital, is principally the crossroads of all Croatian regional cuisines and is often the choice of the best of all of them. There are 13 large, the largest named Dolac, and 10 smaller marketplaces that are all worth visiting. Dolac is located just a few steps from the central Ban Jelačić Square. Zagreb has an Austro-Hungarian heritage which shows in dishes such as Grenadir Marša, a tasty pasta with onions and cheese. Kajzeršmarn is a dessert with caramelized pancakes, pasta with cabbage (krpice sa zeljem) or turkey with pasta slivers. Don’t miss the cheese puff pastries, the fresh cream and cheese, the doughnuts and honey and pepper biscuit. And, of course, while in Zagreb you can always try the very best of the famous Croatian wines.

To the north and east is the upper arm of the Croatian crescent, is the Pannonian plains. The capital Zagreb, in the Julian Alps a region covered with vines and orchards. To the west and south are the karst plateaus of this region, consisting mostly of limestone, are barren at the highest elevations; and heavily forested lower down. The highest mountain in Croatia, Dinara (6,007 feet [1,831 metres]), is located in the central mountain belt. The Istrian Peninsula and the Dalmatian coast extends south for 1,100 miles (1,800 km) of coastline fringed by more than 1,100 islands and islets.

Once a neighbour to the ancient Greeks, Romans and Illyrians, Croatia was a formidable kingdom under Tomislav in the tenth century. It was an international naval power in the sixteenth and seventeenth centuries. Awakening as a national entity in the nineteenth century, Croatia has endured a thousand years of foreign interference, subjugation, incursions. Croatia finally became a distinct entity in its own right in 1992.

Although small in terms of surface area, Croatia abounds in rich culture heritage. The UNESCO World Heritage List shows 22 tangible and intangible goods in the Republic of Croatia. There is hardly a city or region where you will not encounter them. There are 18 other tangible and intangible heritage items on UNESCO’s World Heritage List that you definitely must visit, experience, and try. The newest items on this prestigious list are stećci – monumental medieval tombstones, that can be found at two locations: Cista Velika and Konavle. Be among the first in the world to visit this unique artistic and cultural phenomenon in Croatia.

How to See Croatia

To see all this beauty you have two options.  Take one of Blue Danube Holidays Croatian Coastal Cruises which hug the coastlines of the Adriatic  Sea or  join one of our land based  Croatian tours  that gives you all the cultural stimulation and relaxing days your heart desires.

Visit the Croatia Tourist Authority website to find out more.